In the project it shall be examined how roads can be used as an energy source. Is it possible to gain electricity from roads in summer?

The SEDa research project aims to investigate the potential of road pavements as an energy source. The focus and innovation of the project is both on the potential of the thermal energy stored in the road by solar radiation to generate electricity and on the increased durability of the road construction by dissipating heat.

New materials and composites that combine advantageous heat transport properties with the existing requirements for mechanical behaviour are needed to make optimum use of the solar radiation spectrum. To this end, new multifunctional composite materials for the development of new collector variants are to be investigated. Aspects of urban requirements are to be taken into account in order to develop and implement a holistic concept for energy use. 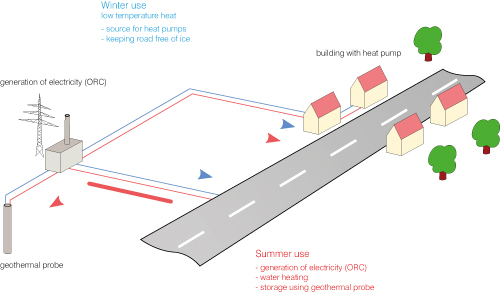 Furthermore, existing processes and systems for the conversion of thermal energy into electrical energy are to be adapted within the framework of this project according to the requirements resulting from the coupling with road-collector systems. The use of ORC systems (Organic Rankine Cycle) appears promising for the conversion of heat into electricity, whereby the temperature levels for this application are well below the usual values of previous uses. Suitable organic substances or mixtures of substances must therefore be identified and characterised as working fluids.

The extracted energy is to be made available primarily in the form of electrical energy. The non-transformable heat quantities are to be made available to adjacent consumers in the urban area. Appropriate approaches with which the energy and CO2 balances of residential areas can be improved are to be developed within the framework of this project. The cooling resulting from the energy deprivation can additionally prolong the service life of the road pavement.

In spring 2017, a demonstrator with a length of 95 meters was realized on the duraBASt for the BMBF-funded research project SEDa. On the demonstrator, two variants of collector systems were implemented, on the one hand a system of plastic composite pipes and on the other a stainless steel pipe system with cooling fins. The examination sections and the various layers in the structure were equipped with measuring sensors. 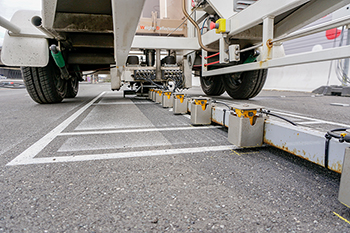 Falling Weight Deflectometer in use

From April to June 2018 Accelerated Pavement Tests were carried out with the Mobile Load Simulator MLS30. Three load surfaces were used to investigate both installed collector systems and a reference surface. The selected wheel load was 50 kN, which was introduced into the construction by means of standard truck tyres. It was to be shown that the designed systems were technically feasible. Furthermore, the durability of the collector systems had to be tested.

The first load field with the collector system with plastic composite pipes was loaded with 1.2 million overruns. The further collector system with stainless steel tubes with cooling fins was only subjected to a comparatively short load of 200,000 rollovers. Only 200,000 overruns were also applied to the reference surface.

A standardized measurement program consisting of bearing capacity measurements (two different measurement concepts), transverse evenness measurements and surface inspections was set up in advance. Up to 200,000 rollovers were carried out on all surfaces at the same interval.