The long pursued wish of BASt to create new and extensive test grounds assumed concrete form during the course of 2013: together with the Federal Transport Ministry and the state agency for road construction in North Rhine-Westphalia ‘Landesbetrieb Straßenbau Nordrhein-Westfalen’ (Straßen.NRW), a decision was made to set up an area on which a reference section for road monitoring and assessment (ZEB) and different test areas to investigate new ideas in road construction were to be realised. A so-far unused area at the Köln-Ost motorway junction (A3/A4) proved to be a suitable location.

Construction officially began with the ground-breaking ceremony on 3rd June 2015.

In view of other concepts for using the selected area, which have since been discarded, extended explorations had to be conducted, structures and conduits adjusted to the new requirements and the terrain remodelled using embankments and support walls before work on building the actual test facilities could be started. These facilities themselves made very high demands on the construction companies and the work to be delivered.

For example, transverse and longitudinal slopes had to be realised which presented challenges to the machine technology and the imagination of staff and repeated 3D laser measurements used for acceptance. The areas set up in the central part totalling 4,300 square metres for demonstrators and test installations were equipped with different types of sensor technology whose data can be requested from work stations in the centrally located operating building via extensive cable ducts.

The studies and tests are controlled from the newly built operating building. A visitors’ centre has been integrated which introduces the area and its possibilities along with the individual projects realised on the duraBASt, and which offers a place where meetings can be held.

Ancillary spaces were created between all test facilities for parking, accelerating and deaccelerating before and after measurement trips on the different sections as well as steel and concrete road restraint systems to protect persons working there. Finally, the site was connected to the public electricity, water and telecommunications network and enclosed.

The duraBASt was officially opened in a ceremony on 18th October 2017 in front of 130 national and international guests from the areas of research, politics, administration, academia and industry. 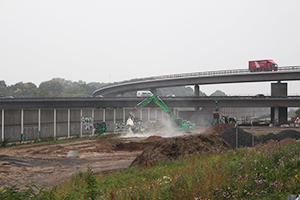 Start of construction work in 2015 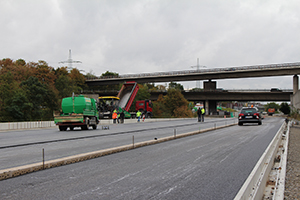 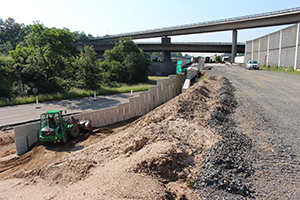